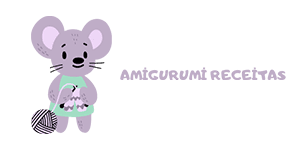 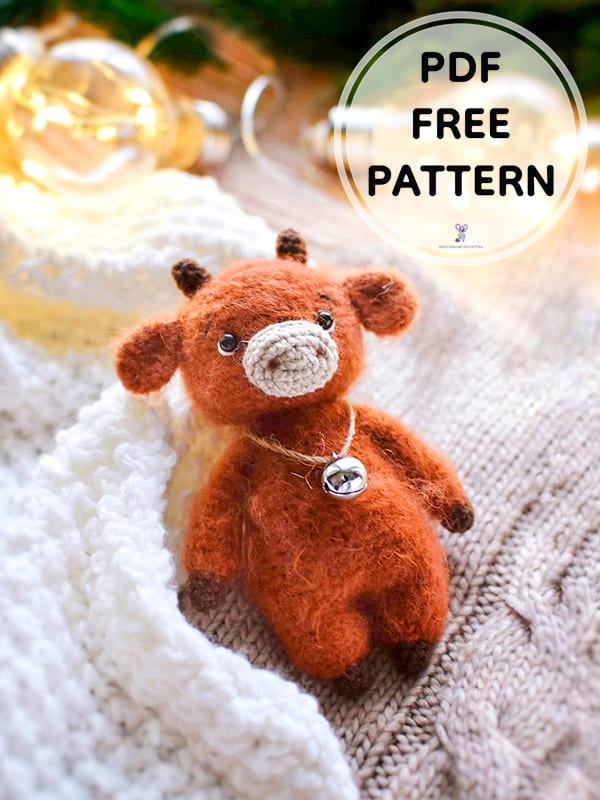 Hello everyone, my friends who love to make amigurumi. Today we will work with you a very cute crochet cow amigurumi toy pattern. First of all, I would like to thank the owner of the pattern for sharing this cute crochet cow with us. With step by step crochet pattern instructions, you’ll easily complete a free crochet pattern. The cute cow has a beautiful bell on its neck, if you wish, you can add accessories according to your own preference and change the main colors. Now I leave you with the free crochet amigurumi pattern. Keep following our website for more free amigurumi patterns.

• The size of the finished crochet cow amigurumi toy is approximately 14 cm. 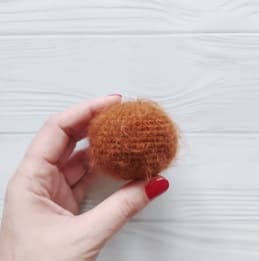 Fasten and cut the thread, hide the tip of the thread inside the part.

Crochet in beige with Alize Cotton Gold.
Dial a chain of 5 ch. 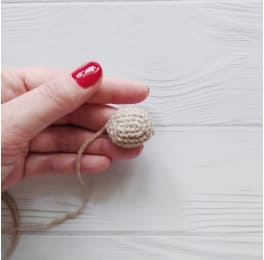 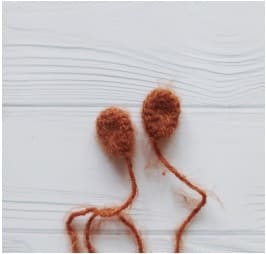 Fasten the thread, cut, leaving a long end for sewing. 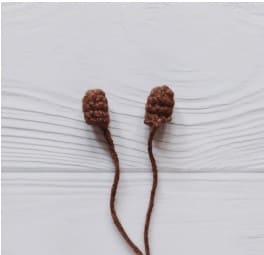 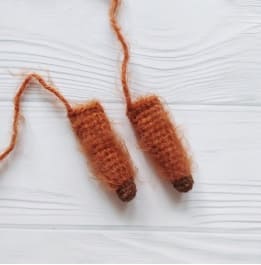 Fold the edges of the part together, crochet 6sc.
Fasten the thread, cut, leaving a long end for sewing. 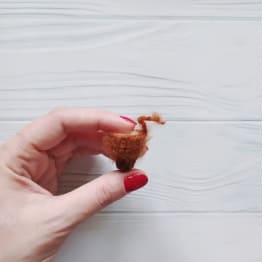 Finish crochet sl st, fasten the thread and cut off.
Tie the second leg in the same way as the first, but do not cut the thread, but continue crocheting.
Rnd 10: Crochet 8sc, dial a chain of 3ch and attach it to the first leg where you finished crocheting. Next, crochet 16sc on the first leg, 3sc on chain of lifting loops, 8sc (38sc). The marker is on the side. 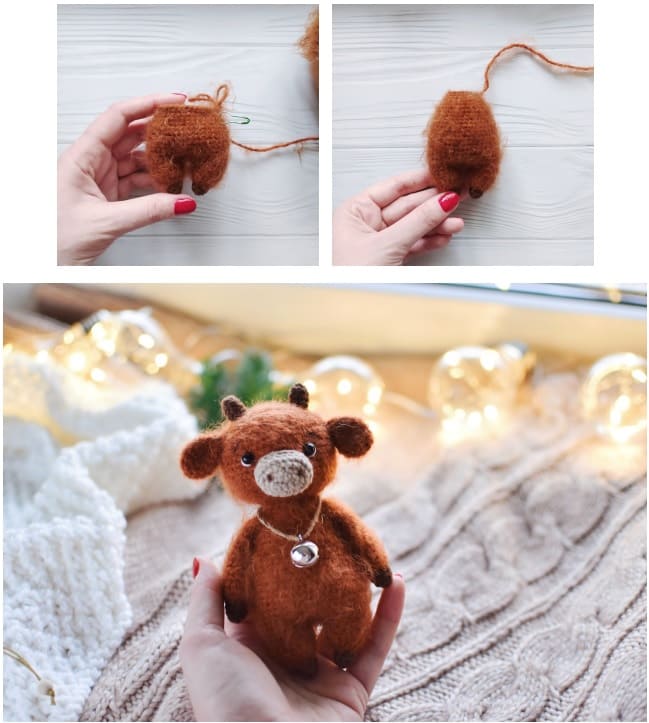 Fasten the thread, cut, leaving a long end for sewing.

Start the design from the head. Determine muzzle location approximately between the 11th and 18th rows of the head, pin pins. Sew around, in progress sewing inside put the filler. 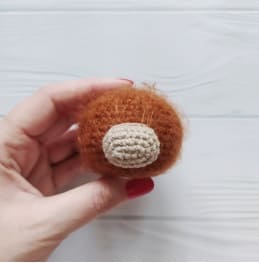 Make a tightening of the nostrils, focusing on a photo. To do this, mark the places with pins the location of the nostrils (stitch 1 and 2 in the photo), the distance between the stitch is approximately 3-4sc. Visually mark stitch 3 and 4 that located on 1sc to the sides of stitch 1 and 2 respectively. 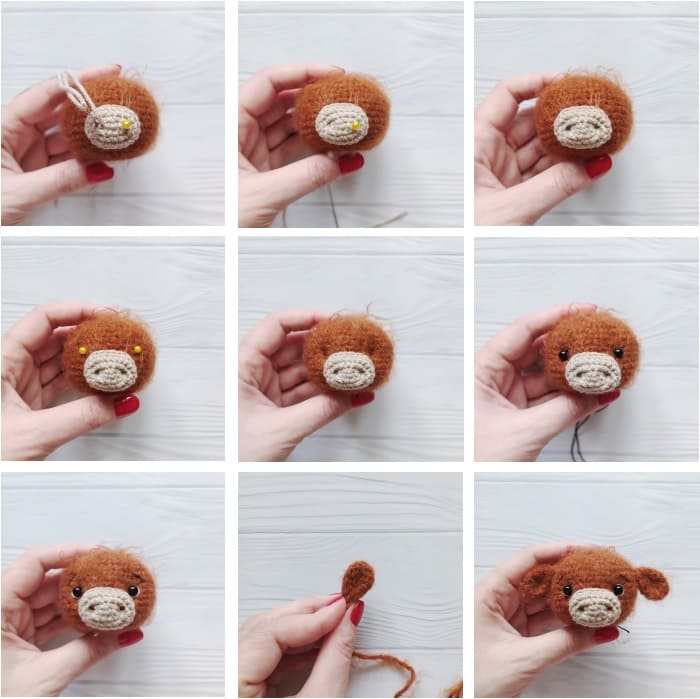 In the places of the tightening, sew on the eyes – beads. With white thread, stitch around peephole to make them look more “alive”. Embroider the brows with black thread.

Fold the base of the eyelet in half and sew with a few stitches as shown. a photo. With pins, mark the location of the ears, sew at the level of the 9th row heads. Sew the horns symmetrically between the ears.

Pin the head to the body with pins, firmly sew in a circle, and when it remains small hole – add more filler between the head and neck, then sew to the end. symmetrical on the sides sew the handles away from the top edge of the body 1-2 rows. 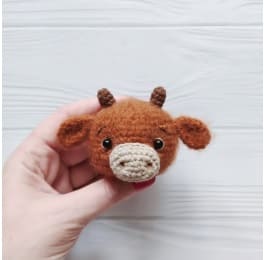 For the ponytail at the back, attach the thread and tie a chain of 7 ch, fasten, tip comb. The toy itself can also be completely comb lightly with a slicker. 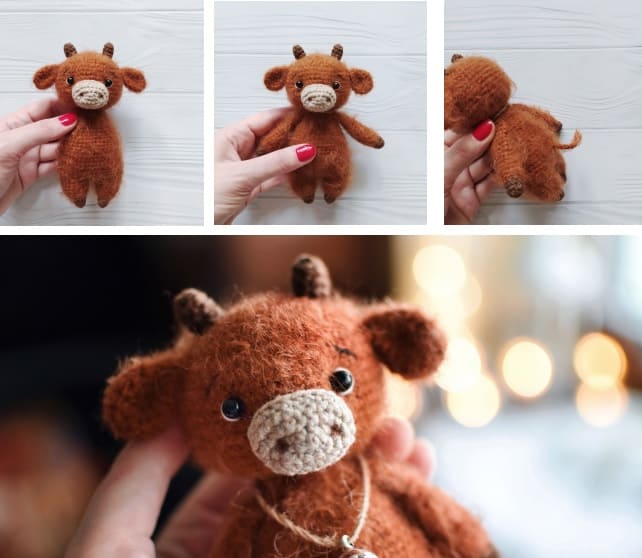 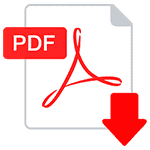